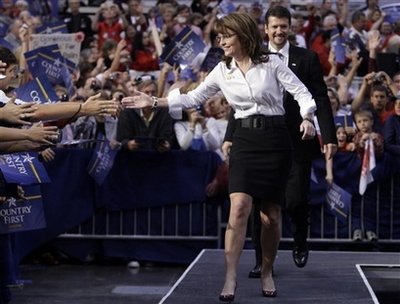 Well, here we go again — yet another day of Sarah P in black and white. And — can we just say? — showing a lot of leg.

I heard an interview with Ted Koppel this afternoon on "Tell Me More" about his new Discovery documentary, The Last Lynching (which took place in the early 80s). With that in mind, and, as I’ve already written, the unpleasant tone of recent rallies, I find it really interesting that she’s choosing to wear black and white — 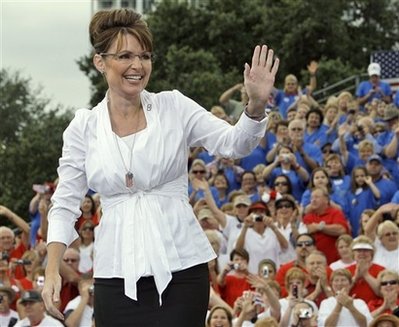 again and again. And again. Is this to suggest that this is a battle in which the forces of good (Palin, of course!) squares off against the forces of evil (Obama, Biden, et al)? Or does it simply underscore the way the narrative of race has taken over the story in recent days? (And, jeez, what’s up with McCain saying today "After I whip his you-know-what in the debate"?)

It really bothers me. I’d almost rather see her in one of those tacky early-days bad-color jackets.